Reality TV star and entrepreneur, Mercy Eke, has said she doesn’t believe that men who are faithful to their spouses still exist.

The 28-year-old stated this during a question and answer session with her fans and followers on Twitter.

A tweep had asked the Big Brother Naija star during the session if she believed that faithful men exist.

“Do you actually believe there is a faithful man? #AskMercyEke.” The fan asked. 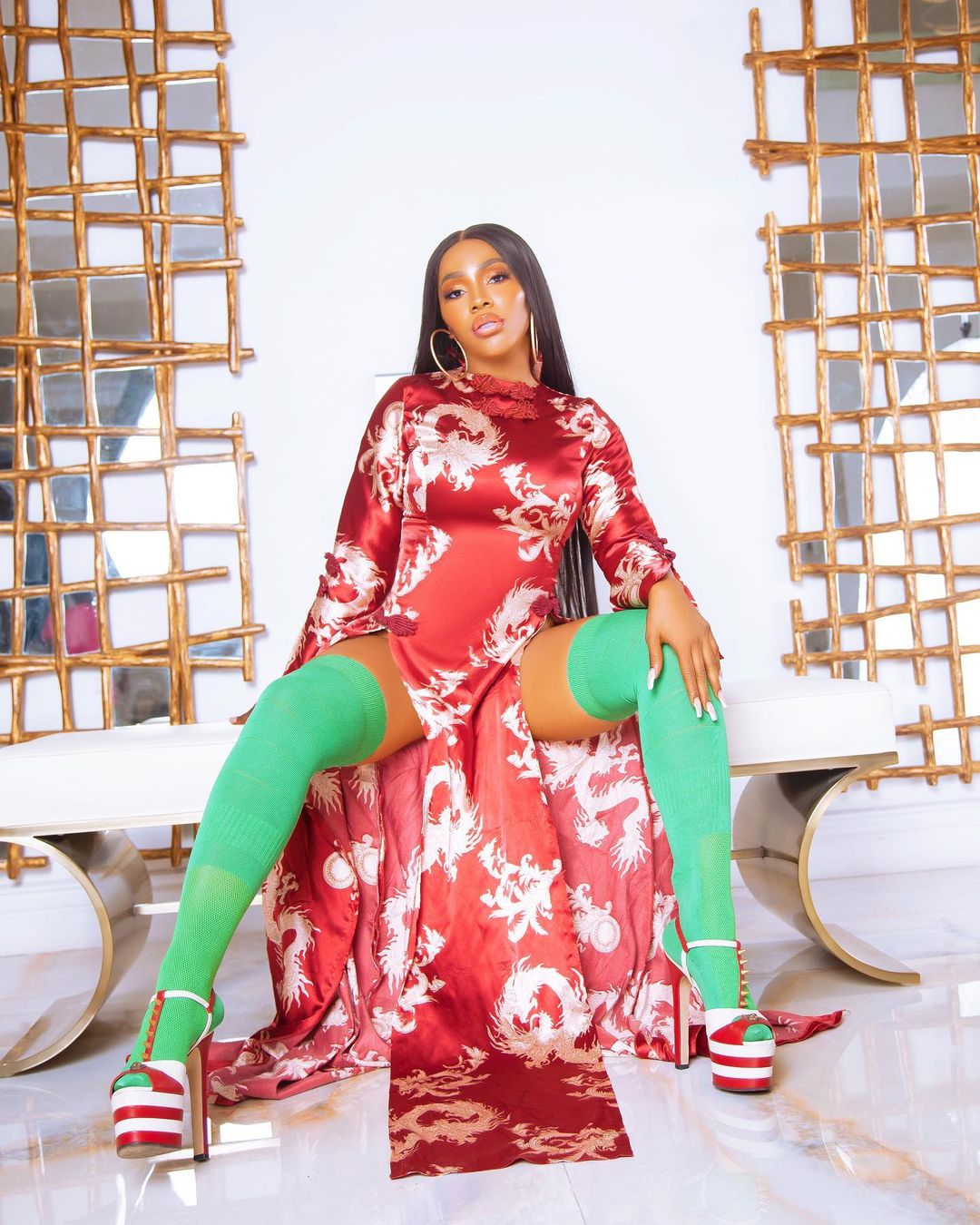 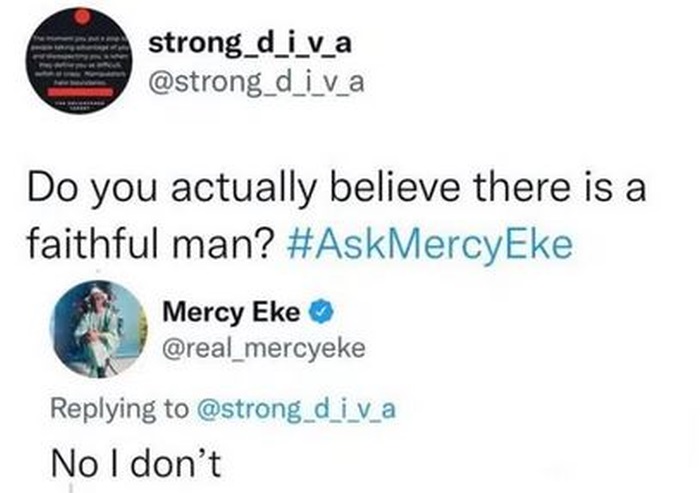 In related news, Nollywood actress, Iyabo Ojo, has urged the spouses of her male colleagues to always be prepared for the unexpected.

The screen diva gave this advice during an Instagram live session with media personality, Daddy Freeze alongside her UK-based colleague, Victoria Inyama, while she shared her thoughts about Nollywood actors.

According to her, she had never seen a faithful actor in the Nigerian movie industry.

“Men cheat. Victoria you should not be surprised, you know how the industry is. It’s very hard for an actor in Nigeria I’ve never seen a faithful actor. It’s a fact. Do you know how women, girls flock around these actors?

“Anybody that is married to an actor should always have…should go and buy what they call shock absorber. Because it’ normal, it’s very difficult. We always just pretend”. She said.

ALSO READ  He looks rich but thinks poor- Davido comes under fire for flaunting his wealth
Related Topics:Mercy Eke
Up Next

Uche Maduagwu Blasts Anita Joseph As She Flashes Her N!pples In Lingerie Photos

Actress, Halima Abubakar reacts after Apostle Suleman threatened legal action if she fails to retract allegations against him

Halima Abubakar, who seemed unfazed by the threat, took to her Instastory to state that she’s ready to face the clergyman in court.
Popular actress, Halima Abubakar, has reacted after famous clergyman, Apostle Johnson Suleman, threatened to sue her if she fails to retract her accusations against him.

Halima has in recent times accused the controversial clergyman of having sexual intercourse with her after lying about his marital status.

She also accused him of reneging on his promise to marry her and said he was behind a strange ailment that has plagued her for years, causing her stomach to swell.
The 37-year-old actress, who took to her Instagram page to make this accusations, also said the clergyman should be held responsible if anything happens to her.

“Pls don’t worry about me. But you can hold Johnson Suleman responsible, just in case.

“You can’t do anything, though. Nigerians are aware. If anything happens, Johnson, it’s you’’, the 37-year-old actress wrote.

Well, in a new development, Apostle Suleman, through his legal representatives, Ephesus Lex Attorneys & Solicitors, issued a cease and desist notice to the actress.

They also demanded that she repays the clergyman all the costs incurred in defending and protecting his reputation.

ALSO READ  If I come in another life, I will serve Davido — Israel DMW
Continue Reading

‘My heart is heavy… pray for me’ — Tonto Dikeh cries out

‘My hearAlthough the movie star did not reveal what is currently bothering her, she said “my heart is so heavy”.

The mother of one said she is not ashamed to indicate that she needs prayers at this point in time.

“I don’t ask for nothing at all. Not ashamed to say I need you all. If you got a minute say a quiet prayer for me (my heart is so heavy). Thanks,” she wrote via her Instagram page on Thursday.t is heavy…Since putting out the post, several of her colleagues and fans have offered words of encouragement to the actress in the comment section.

The actress has established a name for herself in the Nigerian movie industry with a lot of recognition and awards to her credit.

Dikeh was recently picked as a running mate to Tonte Ibraye, the governorship candidate of the African Democratic Congress (ADC) in Rivers state. pray for me’ — Tonto Dikeh cries out.The film star’s nomination came two years after she opened up about her plans to go into politics in 2023.

Davido, the award-winning Nigerian singer, and Chioma Rowland, his third baby mama, have been seen having fun together at a club.In a video shared by Cubana Chiefpriest via his Instagram page on Friday, the ‘OBO’ crooner could be seen sitting while Chioma had her hands around his neck.

“I dey very sure say my sister @thechefchi, go born another pikin next year for @davido. #Vision 2023, Assurance 2:0. As e dey sweet us, e dey pain them, my sister too fine,” Cubana captioned the video in Pidgin.

The duo have been in the public eye for a few years now over their relationship.The musician had proposed to the celebrity chef in September 2019 after the couple had staged a low-key introduction ceremony.

He thereafter announced plans to tie the knot with her in 2020 but would later postpone the wedding.

Their once glowing relationship also hit the rocks in March 2021 after the ‘OBO’ crooner was rumoured to be having an affair with Mya Yafai, American model.The pair welcomed Ifeanyi, their first child, in 2020.

The video has further thickened speculations that the pair are back together again.

This is not the first time they would be seen together at an event in recent times.

Last year, they turned up for a birthday party held for Ifeanyi, with smiles on their faces.

Tobi Amusan returns to Celestial Church of Christ for thanksgiving

ARCON reforms: Is ADVAN in love with the industry status quo?