A shocked Amusan broke a world record, and later bagged a gold for Nigeria.

(CNN)Nigeria’s Tobi Amusan has caused a stir after smashing a world record in the women’s 100-meter hurdles in the semifinals at the World Championships this Sunday.

Amusan came in with a record time of 12.12 seconds, beating Kendra Harrison’s 2016 record of 12.20 by 0.8 of a second.
She went on to bag gold in the final, though her initial finishing time of 12.06 was ruled out due to strong wind speeds. 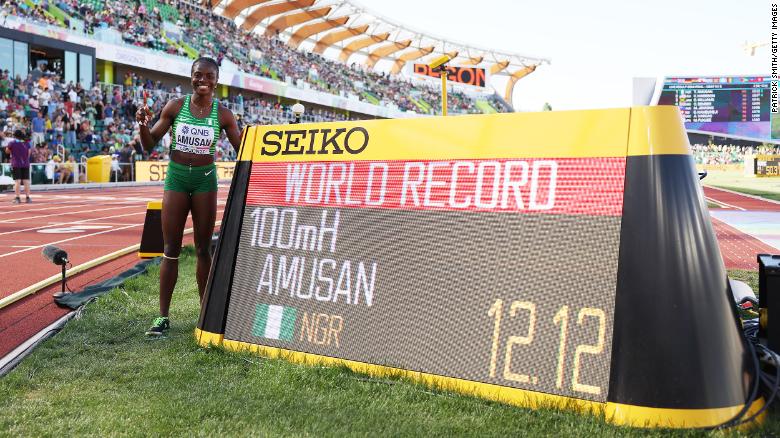 Amusan of poses with her world record in the Women’s 100m hurdles semi-final on day ten of the World Athletics Championships.
Amusan’s world record sent shockwaves through the athletics world.
“Wow” tweeted Jamaican track and field great Usain Bolt, while 200m champion and American record holder Noah Lyles tweeted: “12.12 are you kidding me?” Both congratulated her on Twitter.
In November 2016, the now-25 year old tweeted: “Unknown now but soon I will be unforgettable, I will persist until I succeed.”
“I could not believe it when I saw it on the screen after the semis. But it was just a matter of time,” Amusan told reporters Sunday.
Her win — Nigeria’s first gold at such an event — was met with joy, with congratulations pouring in from a state governor and a presidential candidate in the upcoming 2023 elections.
But some expressed skepticism at the race, which saw numerous competitors run their best times ever.
“I don’t believe 100h times are correct. World record broken by .08! 12 PBs set. 5 National records set,” four-time Olympic gold medalist and BBC commentator Michael Johnson wrote on Twitter, adding that Great Britain’s Cindy Sember commented that she had been running slow at the time of her personal best and national record. 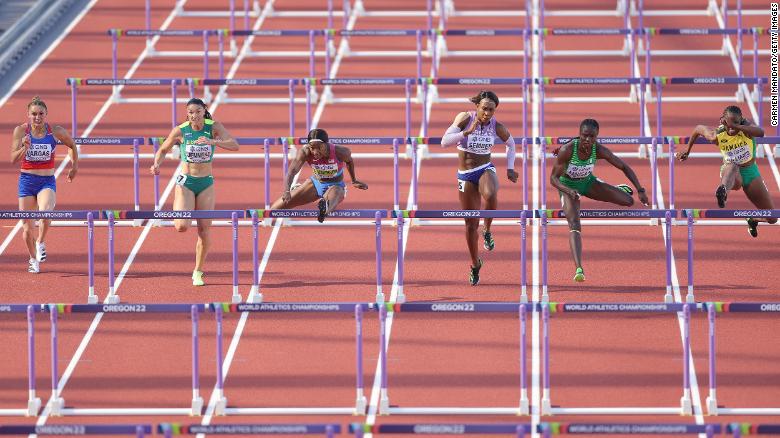 The semi-finals saw numerous athletes set their best times.
“All athletes looked shocked,” the former 200 and 400 meter runner said.
“Heat 2 we were first shown winning time of 12.53. Few seconds later it shows 12.43. Rounding down by .01 is normal. .10 is not,” he said.
Johnson received swift and fierce backlash for his comments, and later returned to Twitter to clarify further, pointing out that he had predicted that Amusan would win.
“As a commentator my job is to comment. In questioning the times of 28 athletes (not 1 athlete) by wondering if the timing system malfunctioned, I was attacked, accused of racism, and of questioning the talent of an athlete I respect and predicted to win. Unacceptable. I move on,” he said.
CNN has reached out to World Athletics for comment.
ALSO READ  Messi flies to USA for Argentina duty ahead of pre-World Cup friendlies

Michael Olise has helped Crystal Palace get a point against Manchester United in their 1-1 draw at Selhurst Park Stadium on Wednesday night.

The midfielder’s late strike in extra-time, 91′, levelled the game against United, who had controlled the lead since the 43rd minute of the first half after Bruno Fernandes’ fine finish put the Red Devils ahead just before the break.

A relentless Olise scored from a free kick with a left-footed shot to the top right corner. The equalising goal saw United’s dream of replacing defending EPL champions City in the second place on the league table, fade away, as they remain third with 39 points, having played a game more than City.

Atletico Madrid head coach, Diego Simeone, has insisted that nobody has personally told him to leave the club.

Rumours have persisted that Simeone, 52, could be set to end this 11-year stay at Atletico Madrid at the end of the season.

However, the Argentine has now stated that no one at the club has asked him to quit the La Liga giants.

Speaking at his pre-match press conference ahead of Atletico Madrid’s Copa del Rey tie with Levante on Wednesday night, Simeone said when asked about reports suggesting he would leave the club at the end of the season: “No one has personally asked me to leave.”

However, having already been eliminated from UEFA Champions League and sitting 13 points behind leaders Barcelona in the La Liga table, the Copa del Rey is Atletico Madrid’s last realistic opportunity for a trophy this season.

It has been a disappointing campaign for Simeone’s side, as they sit fourth in the league.

Simeone added, “The boys are enthusiastic to reverse this situation that we have experienced since the break and prior to the World Cup. It’s been a regular to a bad season. For me, there is growth after the break, hopefully, we will continue in that line.”

Lampard is in danger of being sacked any moment from now after yet another defeat on Friday.

Frank Lampard has now led Toffees to six defeats in their last seven matches and they have also crashed out of the Carabao Cup and are currently 18th in the Premier League.

“Frank Lampard has always been a player and a person that won’t run away from things not going well,” Wright-Phillips told the BBC.