She is such an amazing woman was the first phrase from Davido‘s comments on social media after meeting Wizkid’s mother.

The report among many fans is that the singer, songwriter and producer whose birth name is David Adedeji Adeleke, is at loggerheads with his home country fellow and Grammy Awards winner, Ayodeji Ibrahim Balogun (Wizkid).

Naija News understands that toxic fans of the entertainers have always bantered words on and off social media over who is better between the duo.

However, there were mixed reactions on Twitter today after Davido said he was carrying Wizkid’s mom’s bags around at the Airport earlier.

“Such an amazing Woman … God bless you ma …. D way I was carrying mommy’s bags today at the airport .. dem know say nah First class citizen,” Davido tweeted while responding to a tweet about the development.

Naija News reports that netizens have since shared their thought about Davido’s gesture.

While some expressed hope that Wizkid and Davido are on good terms, some believed the latter’s gesture was just clout chasing.

See some of their reactions below:

@Opsylo_jay – “To be honest I think David has a good heart but his only problem is that he’s so obsessed with overthrowing Wizkid. Wizkid knows this and he keeps his distance. Wizkid is the reason why we’ll probably never have a collabo between him and Davido.”

Davido30bg – “Mama don’t worry he is going to change your life for good.”

BUCHI [@_onyebuchii] – “This is so nice to see, this is actually the kind of attitude and behavior that Wizkid Should emulate, Fandome aside, many Wizkid fc’s would wish to have a fav like davido, The man has a heart of Gold, whereas the introvert wizkid thinks he is being mature.”

Kingjossyjsb [@kingjossyjsb] Replying to @blaccmajek said: “Davido with good heart. Mum will be like. Don’t fight with my boy. Davido will be like okay ma.”

BIG BANKY [@bankynoni01] “If he like make e carry wizkid mama for head we nor go do collaboration with am.”

Blessingblair [@blairvegabless1] – “It would now shock all of u the day u realise there is no beef between davido and WizKid and all the bants been for norin.”

[@iamstevemario] – “If Una like make Una no get sense,keep hating and attacking each other,davido and wizkid might be the coolest of friends and even if they are not coolest they still don’t hate each other like most of u that claim you are fanning them.”

Shading Davido, a netizen, Troy banasco [@BanascoTroy] said: “Davido would literally do anything for clout. I know he convinced mama wiz for a verse from machala.”

Nothing Can Break Family Bond: Peter & Paul Okoye of Psquare Share Sweet Moments With Their Kids in Atlanta

My bum is over-exaggerated, JMK reveals

The curvy former BBNaija ‘Shine Ya Eye’ housemate explained she always has that feeling whenever her backside is being described by people as extremely big.

JMK concluded it’s actually not as big as they say it is.

“I always feel like people over-exaggerate the size of my bum. It’s really not that big,” she wrote.

It is the birthday of one of Nigerians favorite duo, Peter and Paul Okoye of Psquare.

The twins who turn 41 have taken to their Instagram pages to celebrate themselves.

Sharing the same photo, Peter and Paul sent birthday wishes to each other.

They also used the opportunity to promote their new concert at Eko Hotels and Suites.

For their 40th birthday last year, Peter and Paul Okoye had taken to social media to celebrate themselves in a sweet way.

This was their first birthday together after a long beef that spanned over four years before they reconciled and reunited on Wednesday night, 17th November 2021.

Taking to their respective Instagram page, the twin brothers shared a photo of themselves accompanied with happy birthday wishes.

Paul Okoye wrote: Happy birthday to us and tagged his brother peter.

Nigerian celebrities who were overjoyed with their reunion, had stormed the internet to celebrate them.

In a delightful outpour, some Nigerian celebrities like Daddy Showkey, Davido, Kate Henshaw, Destiny Etiko, Funnybone, Zubby Michael and many others had showered love and prayers on them via their Instagram page.

Following their reconciliation, Paul Okoye, had explained why he crashed his relationship with his twin, brother, Peter for six years.

Speaking during an interview, Paul said they fought for six years because of the “devil” but he said they are back for good.

He further emphasised that they are not just back for good together but also have shamed the “Devil”.

“The journey isn’t that easy” Kwam1 admits in emotional note to wife, Emmanuella on their 1st wedding anniversary

It is the 1st wedding anniversary of Legendary Fuji singer, Kwam1 and his wife, Emmanuella Ropo.

Recall that King Wasiu Ayinde tied the knot on this day last year to socialite, Emmanuella at a star-studded wedding.

Marking their first anniversary, Kwam1 ever the romantic lover owned a beautiful note to his wife.

He recounted how he started the journey with her and admitted that the journey hasn’t been easy for them.

However, they will continue to weather the storm together.

Wishing her a happy anniversary, he rained prayers on their marriage.

“A year ago, I announce the beginning of a new chapter in my love life, with the arrival of my Angel sent from heavenly father, to love, adore and cherish for the easy because of side takes, but we weather the storm by the special grace of God Almighty. May we continue to enjoy the blessings as dictate by God the more. Happy Wedding Anniversary to us AYAMI…..Itesi Oroki Omo Olukojiya, same you Ojanimogun ara ijamo, Omo Epo N Pon roro. Aya Omoba Fidipotemole Ojusagbola Ogoji”.

Months back, Emmanuella Ropo, had gotten many talking with her touching tribute and vow.

Emmanuella left many in awe of her sweet relationship with the singer despite numerous hearsay from critics and haters.

Taking to Instagram, Emmanuella shared a lovely photo of herself and her husband, Ayinde Marshall, accompanied by a heartwarming tribute.

Emmanuella revealed how the singer made her happy even when she least expected it, stating every day with him is beautiful.

She also made a strong vow to KWAM1, stating she would be with him until her very last day.

She wrote: Everyday is beautiful with you my man, you have this incredible way of making my heart happy, It’s so amazing when you come into my life, and I expect nothing out of it, yet suddenly, right in front of my eyes, is everything I ever needed. Until my very last day, I’ll be loving you”.

In 2021, the internet was on a shutdown over the wedding of the Fuji singer.

TheHeute News recalls that over 30 traditional monarchs, Nollywood stars, including friends and family, turned up for the wedding of the 64-year-old singer and the love of his life. 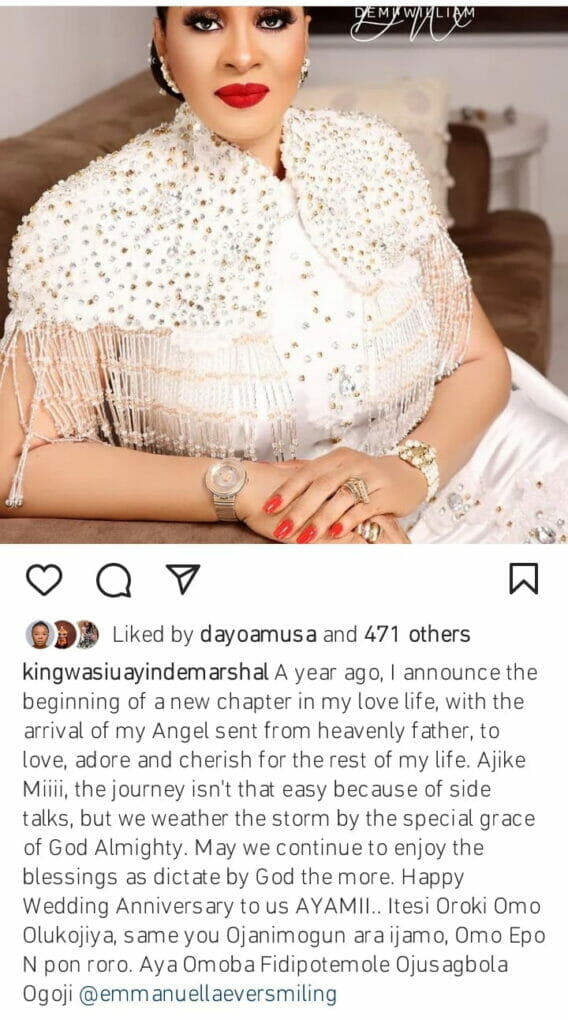