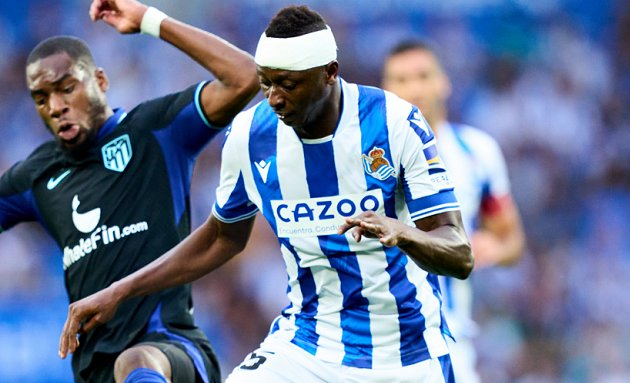 Sadiq linked up with Real Sociedad from another LaLiga club, Almeria, last week in a deal worth €20m plus €6m in add-ons.

The 25-year-old didn’t take too long to settle down into his new environment scoring on his debut against Diego Simeone’s Atletico Madrid at the weekend.

Adepoju was the first Nigerian to play for the Whites and Blues, spending four seasons at the Anoeta.

The former Nigeria international is delighted to see his compatriot do well at his former club and likened him to former Super Eagles striker and the country’s all-time top scorer, Yekini.

“No, I have never spoken to him; but I follow him, I watch all his games and he seems like a great player, he can give more,” Adepoju told Mundo Deportivo.

“He reminds me of another Nigerian we had, Rashidi Yekini, who we used to call ‘gangling’. I think Sadiq is young and can catch up with Yekini.

“He has a goal, quality, height and runs more or less like him.”

Sadiq scored 43 goals in over 80 appearances for Almeria before switching to Real Sociedad.

Michael Olise has helped Crystal Palace get a point against Manchester United in their 1-1 draw at Selhurst Park Stadium on Wednesday night.

The midfielder’s late strike in extra-time, 91′, levelled the game against United, who had controlled the lead since the 43rd minute of the first half after Bruno Fernandes’ fine finish put the Red Devils ahead just before the break.

A relentless Olise scored from a free kick with a left-footed shot to the top right corner. The equalising goal saw United’s dream of replacing defending EPL champions City in the second place on the league table, fade away, as they remain third with 39 points, having played a game more than City.

Atletico Madrid head coach, Diego Simeone, has insisted that nobody has personally told him to leave the club.

Rumours have persisted that Simeone, 52, could be set to end this 11-year stay at Atletico Madrid at the end of the season.

However, the Argentine has now stated that no one at the club has asked him to quit the La Liga giants.

Speaking at his pre-match press conference ahead of Atletico Madrid’s Copa del Rey tie with Levante on Wednesday night, Simeone said when asked about reports suggesting he would leave the club at the end of the season: “No one has personally asked me to leave.”

However, having already been eliminated from UEFA Champions League and sitting 13 points behind leaders Barcelona in the La Liga table, the Copa del Rey is Atletico Madrid’s last realistic opportunity for a trophy this season.

It has been a disappointing campaign for Simeone’s side, as they sit fourth in the league.

Simeone added, “The boys are enthusiastic to reverse this situation that we have experienced since the break and prior to the World Cup. It’s been a regular to a bad season. For me, there is growth after the break, hopefully, we will continue in that line.”

ALSO READ  I’m so broken, my kids have been taken away from me – Korra Obidi, the dancer breaks down
Continue Reading

Lampard is in danger of being sacked any moment from now after yet another defeat on Friday.

Frank Lampard has now led Toffees to six defeats in their last seven matches and they have also crashed out of the Carabao Cup and are currently 18th in the Premier League.

“Frank Lampard has always been a player and a person that won’t run away from things not going well,” Wright-Phillips told the BBC.

Outrage as Ezendigbo of Ibadanland confers chieftaincy title on Olubadan