Big Brother Naija ‘Level Up’ housemate, Groovy has revealed why he doesn’t feel guilty from moving on from disqualified housemate, Beauty.

The shocking eviction of Beauty broke the internet in July.

Beauty was disqualified following a double strike given to her before Sunday’s live eviction show.

Beauty was punished for an altercation with Groovy during Saturday’s party.
Beauty had gone berserk during the party after seeing him dancing with Chomzy, whom she had warned him to stay away from.

During the drama, Beauty, already intoxicated, shocked her fellow housemates when she spilled the tea about her relationship with him.

Beauty revealed that Groovy had gone down on her a few times since the show began.

She said that Groovy had sucked her breast and had fingered her.

No doubt doing all of this and seeing her boyfriend misbehave with other housemates tore her down.

Getting back at him, the Miss Nigeria beauty queen took a dig at his genitals as she bodyshamed him.

Beauty went on to destroy Biggie’s property in the heat of her anger and almost assaulted Groovy.

As punishment for her action, the ex beauty queen was disqualified from the show.

This was a shock to many as they didn’t see her disqualification happening soon.

Surprisingly, Groovy moved on from her speedily with Phyna, who many believe was Beauty’s friend.

Groovy, Phyna, Eloswag, Sheggz, Chomzy and Chichi were given access to Level 3 for a movie night where they ironed out issues going on in the house.

Chomzy slammed Groovy for quickly moving on from Beauty especially knowing she got disqualified because of him.

“Why didn’t you give her the respect of waiting at least a week before moving on. She was disqualified because she was in love with you”.

Replying her, Groovy stated that he doesn’t owe Beauty any loyalty as they broke up the night before her disqualification.

Groovy added that he was never in any relationship with Beauty and didn’t know the type of friendship.

“I don’t owe Beauty no loyalty, myself and her broke up the night we had a fight and hadn’t settle before her disqualification. I was never in any relationship with Beauty before moving with Phyna and I don’t know the type of friendship between Phyna and Beauty”.

Nigerian man has narrated how a customer took a loan from a popular microfinance bank and lost almost everything to sports betting.

He shared the man’s story in a documentary about the dangers of gambling and people who are addicted to the act.

The young bet centre operator said that the man visited the microfinance bank and took a loan of N120,000 using his brother as guarantor.

But the shocking part is that as he was leaving, he entered his virtual betting centre which was in the same building.

He then used N119,000 out of the money to bet, unfortunately he lost it all. Feeling frustrated by the outcome, he used the remaining N1k to buy weed and alcohol.

Award-winning Nigerian author, Chimamanda Ngozi Adichie, who was recently decorated with Harvard University’s iconic W.E.B. Du Bois Medal, has broken her silence over her non-appearance at the conferment of national honours ceremony by President Buhari. on Tuesday, October 11.

Putting the records straight, a member of Chimamanda’s communications team, Omawumi Ogbe, told The Guardian that she declined the honour.⁣
⁣
“Following the recent conferment of national awards by the President, there have been conflicting reports about one of the announced recipients, Chimamanda Ngozi Adichie. Some social media users say the award-winning writer rejected the award, while others say she accepted it.⁣
⁣
The author did not accept the award and, as such, did not attend the ceremony. She, however, did not want to create undue publicity around it, so her non-acceptance was conveyed privately,” Ogbe said.

While conferring the award on 450 Nigerians and foreigners, President Buhari had justified the honours, saying the awardees had distinguished themselves in the service of the nation and humanity.⁣

“We have among the recipients today, Amb. Prof. Tijjani Muhammad-Bande, Dr. Ngozi Okonjo Iweala, Ms. Amina J. Mohammed and Chimamanda Ngozi Adichie, who are doing our country proud on the international scene. Our dear sisters are a source of inspiration to our young women that through the dint of hard work and dedication, they can achieve greatness,” ⁣the President said.

Lady says as she recounts lovely experience with husband

A young woman has taken to Twitter to recount her experience with her husband after he lost his job one month into their marriage.

The Twitter user, identified as @adaratheexploer, in a series of tweets, said when her husband was fired at his place of employment, he was scared that she would dump him because he could no longer provide for their family but she stood by him and became the breadwinner without complaining.

She said after her husband got back on his feet and was financially stable, he fulfilled all the promises he made to her because she was loyal to him.

Speaking from her experience, the young woman asserted that a man who loves his wife would never forget how she supported him during his trying times.

Read the full thread below,

“One month after we got married, my husband was fired from his job. We were newly married. Wedding was debt free & we used the money we got in gifts to pay down student loans. That left us with a whopping $1500 in our accounts between the two of us. $1000 in mine and $500 in his.

Fired with $500 in his bank account. That left me with $1000 in mine but I still had a biweekly paycheck because I was working. I will never forget the day he was let go. It was not like a usual day. He barely spoke to me all day and in the afternoon he texted. We have a rule – No important things are discussed by text (that’s another post for another day) but I will never forget the text “hey babe, we need to talk and it’s not a text conversation. Can I call you right now?” I knew this was serious so I excused myself to talk I called him.

Before I could utter a hello he broke down & told me he got fired out of nowhere. He kept saying “I don’t know what I’ll do if you leave. Give me time to find another job & provide”. I had never seen him so afraid. He kept begging me to come home and that he would figure it out

I was baffled because leaving had never even crossed my mind! In my mind as soon as I heard the “fired” I started calculating how much overtime I could swing to carry us and our church mortgage. Oh yeah, my husband pastors a church. The whole idea that pastors steal money is wild.

We were paying several of our church’s bills. Because that’s what you do when there’s a need. Anyway, I told my manager I had an emergency at home and left. I came home to him crying & I realized this deeply hurt him because he was used to providing and always had done so.

Now a month later that was being snatched and things were about to get shaky. We would struggle a bit. However, never in my mind did I think about leaving. In fact, I got another job. For better or worse was imprinted on my soul. So we had dinner that night.

We didn’t have a kitchen table so we sat on our pull out couch and ate Wendy’s. He said “babe, I know it doesn’t seem like it right now but we can come back from this. I just need a little time. Please just give me time. To which my question was obvious – how much time.

He said he didn’t know but he gave me his word that it would happen and my dream of being a stay home wife would happen. Dreams are funny little things. They require work to become reality. And that’s what we did. We worked together. And I never once spoke down to him.

He just needed time and for me to trust. Fast forward, everything he promised, he made good on. The moral of this is that a man who loves his woman never forgets how she was there when he lost everything. When he is in the position to, he will later give her everything and more.”

Advertisement
ALSO READ  How many Nigerians are in Italian jails? 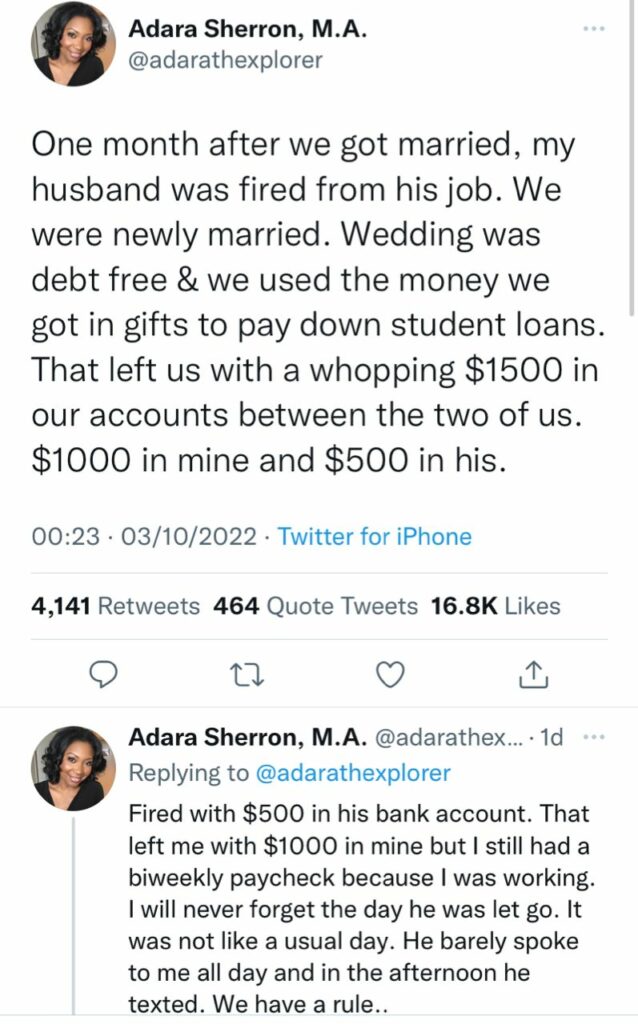 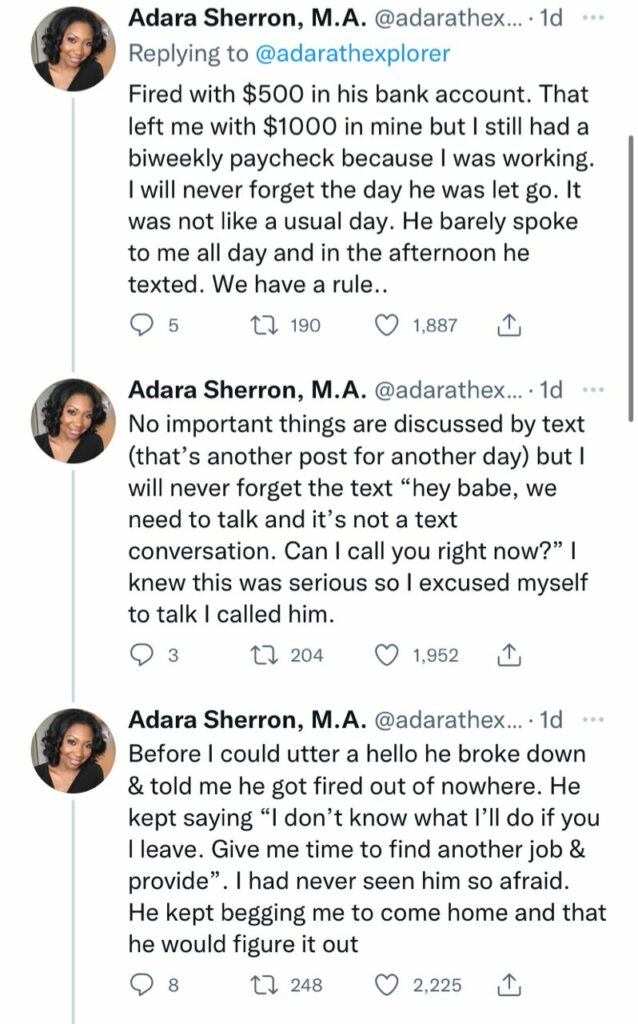 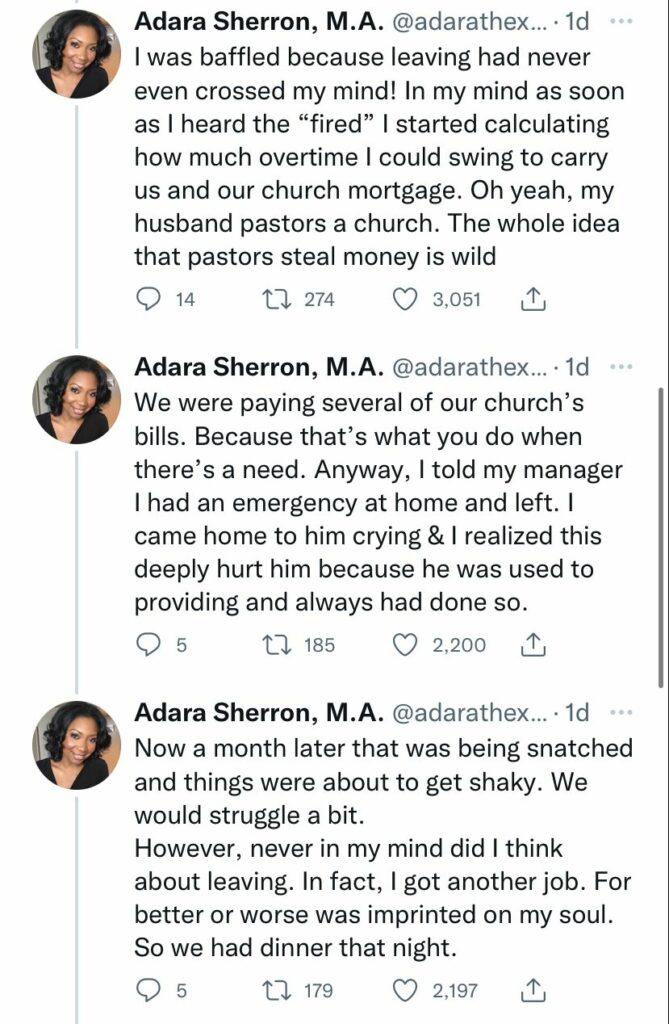 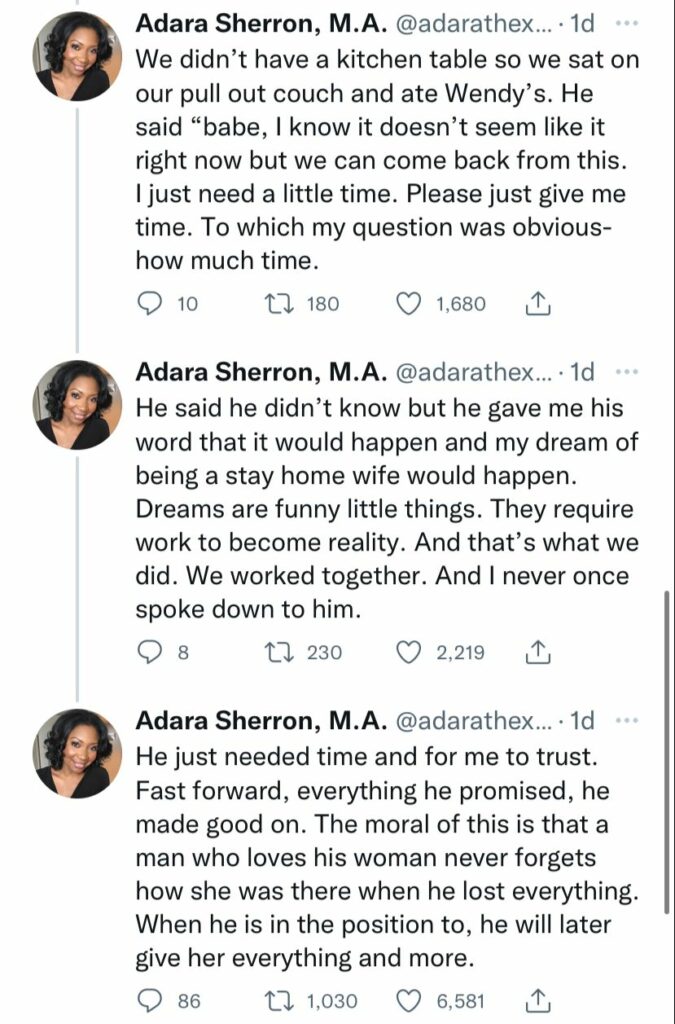 Lecture on the Tenets of Celestial Church of Christ